Some two years ago, Hanna Hodacs and I co-sponsored a workshop called “A Global History of Linnaean Science” at the Royal Swedish Academy of Sciences in Stockholm, where we were hosted by the Director of the Academy’s Center for History of Science, Karl Grandin. It was a small event, with eight presentations and a total of 22 participants, but we thought it a great success and decided we should try to publish the papers as a collected volume. One of the participants that day, Stéphane Van Damme, agreed to edit the collection together with us, and we began to plan for a second workshop more focused on discussing draft chapters than oral presentations. 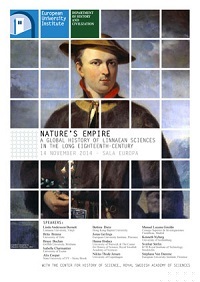 After a long time of preparation we finally reconvened last week, on 14 November, for an intense day of discussions at the European University Institute in Florence, Italy. Stéphane is now a Professor of History of Science at the Institute, which graciously provided all the local arrangements and facilities as well as lodging for those who attended. Karl Grandin and the Swedish Academy of Sciences once again generously supported us, this time by helping with the cost of travel for some of the participants flying in from various countries in Europe and elsewhere. The full title of this second workshop was “Nature’s Empire: A Global History of Linnaean Science in the Long Eighteenth Century” and the programme including a list of contributors can be downloaded here (PDF, 643 Kb).

It turned out to be an extraordinarily productive day of rich, stimulating discussions about many aspects of Linnaean natural history and, more broadly, the early modern global history of science in which Linnaean ideas, practices, objects and people played an important role. It is not possible here to even try to summarize these discussions, especially as they were often linked – in one way or the other – to specific aspects of the pre-circulated papers that we had all read. However, the statement of aims in the programme gives a good general idea of the issues and questions covered in the course of the day:

This conference addresses a topic at the forefront of many discussions today, the global circulation of knowledge. Few eighteenth century figures can have contributed as much to the globalisation of natural history knowledge as the naturalist Carolus Linnaeus (1707–1778). The publication of Species Plantarum in 1753, Linnaeus’s global flora where he launched his new scientific nomenclature to an international audience, is often referred to as year zero in the history of modern botany. Published at a time that saw an escalation of contacts between different parts of the world, Linnaeus’s work promoted global communication and exploration of the species of the planet.

The argument of this conference is that in order to understand this process we need to move beyond the individual intellectual contributions of Linnaeus to focus on processes that involved circulation and modification of knowledge. This […] includes discussions on early modern information storing technologies and the use of landscapes for pinning names to nature and establishing orders and systems. It also focuses on the creation of collective and individual identities through reading and corresponding, and the role of journeys, in and between landscapes, shaping knowledge gathering and the lives of knowledge gatherers.

[The] conference aims also to offer a historiographical perspective on this process, including a discussion of pre-Linnaean natural history, and the legacy of Linnaean natural history in modern scholarship. Linnaeus’s interest in natural history was largely aimed at exploring resources at home in Sweden, or enriching domestic flora and fauna with exotic plants and animals. His taxonomy and nomenclature were of course to have more far ranging impacts than that, and as such [the book in preparation] will also offer a way of thinking of the connections between local and global and knowledge and power, and thereby contributing to current debates about the relationship between science and European expansion.

Producing a book is often a protracted affair and much work clearly remains; while the workshop resolved some issues and enhanced our understanding of others, it also raised new questions that need to be answered before we are done. Still, I think we all felt that this one, long day of conversations about the global history of Linnaean science brought us quite a bit closer to our goal. The next step, for authors and editors alike, is as expected as it is familiar to all of us: Revise and resubmit. And that, of course, has always been what both scholarship and science is all about.